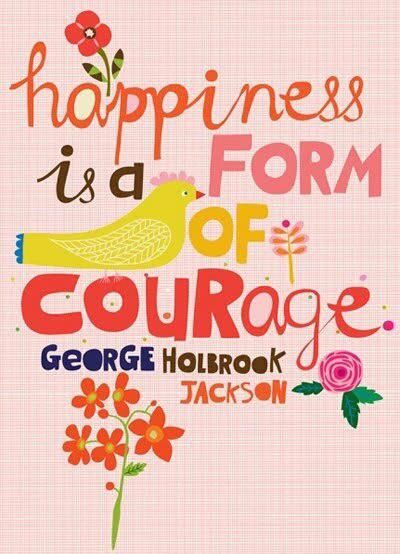 Happiness is a Form of Courage

Be gentle with yourself. It’s okay to smile.

I remember going to a Hall & Oates concert less than a month after my son died. I posted things on Facebook about it and didn’t care what people thought. My heart was heavy, sick, fragile and desperate. So broken and so desperate that it just didn’t matter – I just wanted a couple of hours of no tears, no songs that’d set off another tsunami of grief, no risk of running into his friends.

But at some point as the months went on I began to care about what other people thought. I had to learn to let myself have moments of laughter. I had to learn that those moments were healthy and not dishonoring to my son. Those moments did not mean I didn’t love him. Then the most horrifying thought occurred to me at one point, “Did Drey kill himself because he knew I’d eventually be happy again anyway? Did he think he wasn’t my everything, my pride and joy?” It was a sucker punch to the gut. I was tumbled into that damn abyss of darkness and pain then had to once again learn to let myself have moments of laughter. These thoughts still creep into my mind but not as often as they used to. They lost some of their power by saying them out loud to someone who understood.

One time I went on a beautiful walk called the Memory Mile. I met wonderful people, most of whom were grieving the loss of someone special to them. There were signs all along the walking trail. Encouraging signs. One read, “Happiness is a form of courage.” Wow. That spoke to me in a huge way. I came to believe that in time. Happiness truly is a form of courage. Not the only form of courage but a form.